The biomechanics of yoga forward folds: how can we make them more accessible?

Jennilee looks at the muscles and actions involved in yoga forward folds, what might be restricting us in the poses and what we can work on to make them more comfortable. 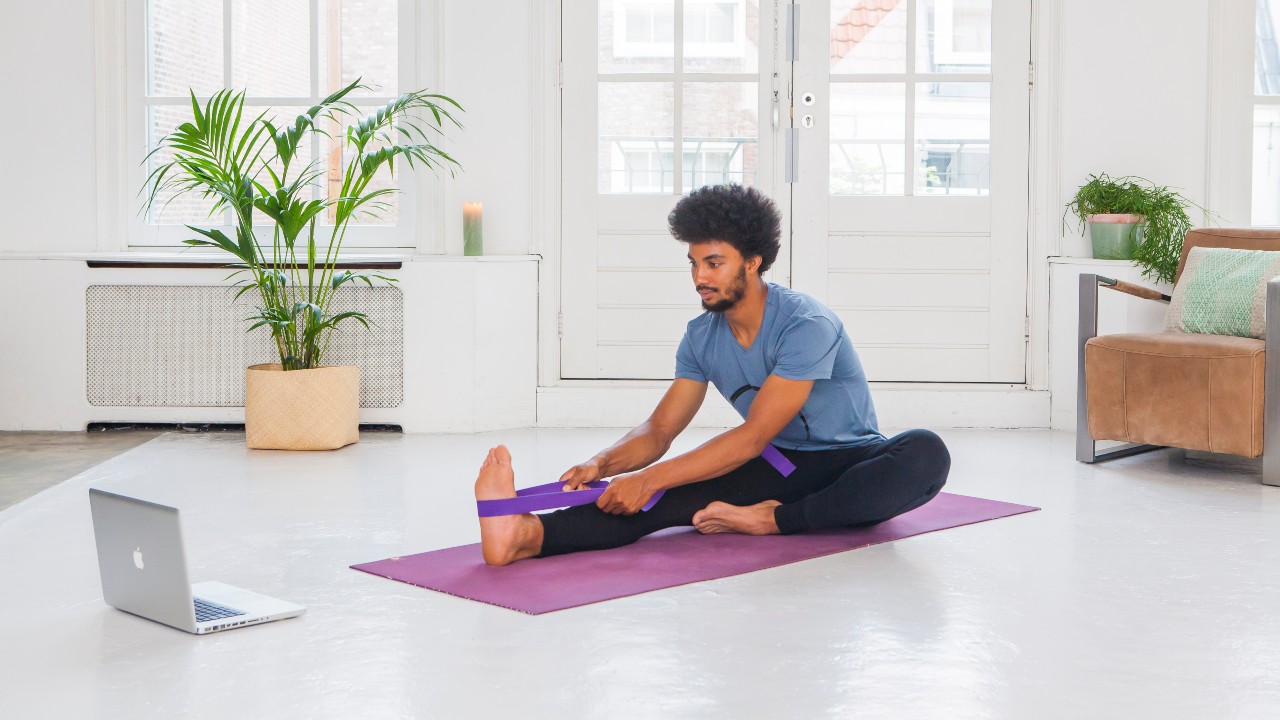 In yoga, forward folds are types of poses where the front of the upper body comes towards the lower body. They include (amongst several others):

These are generally thought of as calming and introspective postures because they mimic the protective fetal position, drawing our energy and attention inwards. As Mark Stephens writes, “Forward bends are deeply calming asanas that draw us into the inner mysteries and dynamics of our lives.”

In this article, we’ll look at the anatomy of the forward fold, what causes restrictions in these postures and what we can work on to improve them.

Forward folds or Forward bends: is there a difference?

In asana class, we hear these poses described as both “forward fold” and “forward bend”. Is there a difference between the two phrases? What does it mean to fold forward versus bend forward? Is one safer? Easier? Before we go into the anatomy let’s first look at the language:

To bend – verb – shape or force (something straight) into a curve or angle.
“the rising wind bent the long grass”

To fold – verb – bend (something flexible and relatively flat) over on itself so that one part of it covers another.
“she folded all her clothes and packed all her bags”

So for me although these phrases are often used interchangeably, forward bends imply a rounding of the spine, whereas forward folds imply hinging at the hips while maintaining a straighter back.

What happens when the upper body and lower body meet?

To begin our exploration of whether we ought to bend or fold forward, let’s look at the biomechanics of the upper body and the lower body meeting in the anterior portion of the sagittal plane (forward flexion).

Flexion at the hip creases (iliopsoas muscles) allows for the upper body (spine, pelvis and upper extremities) to make its journey towards the lower body (or vice versa if drawing lower body to meet upper body as in Plough Pose). This brings the spine towards the femur bones and encourages an anterior tilt of the pelvis (anterior superior iliac spine (ASIS) to the femur) along the way.

This action at the hips is one of making a crease, what I would consider a fold, at the inguinal ligament area (the junction between the anterior ilium and femur). When we fold at the hip crease AND keep length in the spine (axial extension) there may only be so far one can travel. At some point, whether it be due to tight calves and hamstrings preventing the anterior pelvic tilt or soft tissue meeting and compressing other soft tissue (skin, muscles, tendons, ligaments, fat) bringing the upper body closer to the lower body requires a “bend” of the spine over the legs.

As the thoracic spine is already in a natural kyphotic curve it’s ok for most people to drape the upper body over. Where there begins to be an issue is in the lower lumbar curve – a naturally convex curve that when asked to forward flex barely moves towards neutral. This is why many yoga teachers will cue to only come down as far as you can, in the forward fold, and still maintain the extended spine.

What can restrict us in Forward folds?

1. Overstretched (and weak) lower back muscles

Unfortunately, for many people, sitting improperly on a chair for computer work and/or on a couch for laptop work (or video games) has encouraged the naturally lordotic lumbar curve to do what it does not naturally do – “bend” into a kyphotic curve. In other words our lower back starts to round outwards creating a C shaped spine. This slumping forward flexion posture overstretches the posterior spinal ligaments and deep, intrinsic spinal stability muscles, compresses and compromises the intervertebral discs, and leads to inefficiency and dis-ease of not only breathing muscles and organs but digestive, assimilation and elimination ones as well.

In a forward fold, a practitioner with this habitual pattern set up in the lower back may actually find it easier to bend into a pose (not with hip flexion but with spinal bending into a kyphotic curve). Unfortunately, the transition out of the pose can be problematic. Because the muscles are tight, locked-long and weak, muscle spasms and/or nerve impingement can happen when they bring their upper body upright again. In yoga, we want to strengthen the muscles that support a natural lordotic lumbar curve and because of this, we often encourage forward hinging at the hips only as far as one can go without rounding the spine.

When discussing tight hamstrings we need to take into consideration which part of the hamstrings are indeed tight…and what kind of “tight” are we talking about? Are they tight locked-short muscles fibres or tight locked-long muscles fibres? We would approach the posture differently for each.

Many people have tight locked-short hamstrings at the distal end (by the knees) from their habitual pattern of sitting for long periods at a time. This also leads to upper calf tightness. Because of this tightness, it can be very difficult to straighten the knees in any yoga poses. In a forward fold, this tightness behind the knees of calves (gastrocnemius) and the three hamstring muscles (biceps femurs, semitendinosus and semimembranosus) limit the ability of one to fold forward with straight legs. In this case, bending the knees can help to find some freedom in the pelvis to anteriorly tilt forward.

For as many people with the above muscle imbalance, there are as many people that have tight locked-long hamstrings at the proximal end (the ischium/sitting bone attachment). This lengthened upper hamstring might not prevent the practitioner from experiencing a deep forward fold but may put them at greater risk of a hamstring injury. I have had too many student-friends suffer from persistent burning pain from overstretching in forward folds (tendinopathy) and also too many student-friends suffering from an avulsion – after hearing a “pop” in a forward fold, x-rays reveal the hamstrings tendon has “popped” off the ischium bone. Ouch! These practitioners would also benefit from only coming halfway down in forward folds with the spine extended long (or also bending the knees, even if slightly).

How to make forward folds safer and more satisfying

1. Strengthen the erector spinae muscles in the lower back and shorten ‘locked-long’ upper hamstrings:

2. Dynamically and actively stretch the lower hamstrings and upper calves

Try these poses where the hips are internally rotated

Is it better to ‘hinge and fold’ or ’round and bend’?

So should we always aim to fold, keeping length in the spine and not bend? The answer is – it depends what the aim of the pose is. In some poses rounding the upper back is beneficial. For example (in Yin Yoga) Caterpillar pose is the equivalent of seated forward bend/Paschimottanasana, but in Caterpillar, we are not trying to lengthen the spine in axial extension or hinge in order to stretch the hamstring muscles. The aim is not to bring the head to the feet but, rather, round the spine so the head comes towards the knees. This way we can soften and open the back Urinary Bladder meridian lines.

Another example of bending rather than folding is Bakasana / Crow pose, which BKS Iyengar described as the superior Forward bend.

When there is a backache, if you do Paschimottanasana, it does not relieve you. Do Bakasana, it relieves you. Because of the hardness of the sacroiliac muscle, the hardness of the lumbar in Paschimottanasana means you are extending. In Bakasana you are curving the spine, resting, and in the resting, you are responding. So my pupils should know that Bakasana is a superior forward bend.

Looking at the biomechanics of Crow Posture I can see why Iyengar calls it a “better” forward bend than others (I ask “better” meaning easier? Safer?). The domed thoracic spine over the hinged hips makes it a forward “bend”. Tight hamstrings have been taken out of the equation since knees are bent and the forward flexion isn’t so deep. Tight external rotators are also not an issue because in Crow you have a little external rotation. In short, all of the limiting factors I’ve mentioned in this article have now been removed.

Now all you need is the upper body and core strength to hold yourself up in this arm balance and you’re good to go!

Anatomy immersion with Jennilee Toner on the EkhartYoga Academy

Exploring both the Western view of the ‘physical body’ and the yogic approach to the ‘subtle body’, this online training is designed to provide you with a deep understanding of human anatomy so you can teach and practice in a safe and sustainable way.

Jennilee TonerJennilee has the best job in the world…travelling the world and teaching four of her passions: yoga, human anatomy, injury prevention, and mythology of the asanas.
Follow
AnatomyBack health
Play
Pause
Connect
Support
About
Apps