Upper back pain and how yoga can help

Jennilee looks at some of the causes of upper back pain and offers suggestions of yoga poses to strengthen and release the upper back muscles. 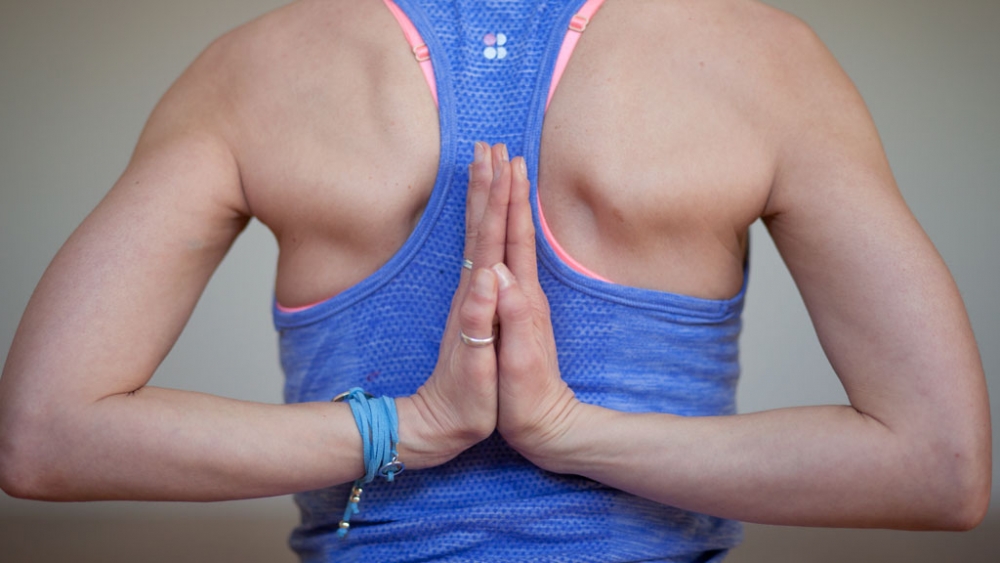 Many of my students come to yoga complaining about back pain. This article will specifically focus on upper back pain.

Often these pains are directly related to habits and conditioning (repetitive patterns performed in limited planes of movement) affecting our skeletal muscles and posture. As we’ve talked about before sitting at a desk, hunched over a computer, driving, and other activities performed in the forward flexion portion of the Sagittal Plane usually result in tight, locked-short pectorals (chest), upper trapezius, levator scapula, subscapularis and/or serratus anterior muscle fibres. These repetitive patterns can also result in tight, locked-long rhomboids, mid to lower trapezius, serratus posterior and infraspinatus muscle fibres.

In order to help alleviate this situation, we need to educate ourselves on muscle physiology and what we can do to strengthen and stretch weak and tight skeletal muscles for optimal balance and radiant health.

What are skeletal muscles?

Skeletal muscles are bone movers that cross a joint where two bones meet. The proximal attachment via tendon (the origin of the muscle) is always closest to the trunk and the distal attachment via tendon (the insertion of the muscle) is always farther away from the trunk. Agonist muscles are the primary mover of a joint and can only perform their job efficiently and effectively if the opposite muscles (the antagonists) relax. If the antagonist muscles do not relax (instead, remaining in a contracted, locked-short over-a-length-of-time state) the agonist muscle has trouble working, the muscle fibres become locked-long and then, over time, become weak.
Two examples of this in the upper back are if pectorals muscles are locked short (from being hunched over a desk for prolonged periods of time) rhomboids will eventually become locked long and if pectorals minor become locked short (also with too much desk/computer time) mid- and lower-trapezius muscles will eventually become locked long.

Skeletal muscles are striated muscles containing an infrastructure of sarcomeres and the stacks of thin and thick contractile called myofilaments. After a series of chemical reactions, a bond is created between the thick myosin filaments and the thin actin filaments (myosin causing the actin filaments to pull past each other causing a contraction (sarcomeres, the basic unit of contraction, shorten). In order for the muscle to relax, another set of chemical reactions cause the bond between myosin and actin to be broken, the sarcomeres to lengthen, and the muscle to relax. When muscles find themselves in a chronic shape (habit and conditioning) then there is a decrease of expression in the bonds between the myofilaments (decrease of contraction and relaxation). With this lack of activity/movement muscle fibers become either locked-long or locked-short…tight and weak either way.

When stretching a skeletal muscle (overlap of myosin and actin filaments decrease and sarcomeres stretch) some of the fibers lengthen and some do not. That is why both dynamic and prolonged static stretching in yoga are so important. Dynamic stretching, moving in and out of the stretch as in Vinyasa yoga, allows for more and more muscles fibers to be recruited each time the muscle is stretched. In prolonged static stretching (holding the pose), more and more muscle fibers are recruited by holding the stretch for a specific (lengthened) duration of time.
When the myofilaments and sarcomeres stretch (and connective tissue surrounding stretches as well) fibers that have been disorganized due to lack of activity/expression/movement will then begin to reorganize in such way that the muscle is restored to its optimal resting length.

Yoga poses for your upper back

Now we’ve looked at the construction and action of the skeletal muscles, what we can do to keep them moving and avoid them becoming locked-long or locked-short due to our daily habits? A well-balanced, intelligently-designed yoga sequence will get our bodies moving through all planes of movement, but we can also use specific poses to target the upper back specifically. Here are a few favorites:

Poses to stretch your upper back

Poses to strengthen your upper back

Poses to relax & restore your upper back

…and my off the mat technique

When I am conversing with friends or students, one of my favourite practices is to place my arms behind my back and hold onto opposite elbows (like a reverse ragdoll arm configuration). This strengthens my rhomboids, mid trapezius and serratus posterior. This posture also encourages my collarbones to broaden and my pectoral muscles to soften and stretch, allowing more space for my heart and my lungs….and it feels so good to be with my friends with an open heart!

Jennilee TonerJennilee has the best job in the world…travelling the world and teaching four of her passions: yoga, human anatomy, injury prevention, and mythology of the asanas.
Follow
Pain reliefBack healthUpper back
Play
Pause
Connect
Support
About
Apps