Cues, balance and mindfulness: Angela Allen talks about the three key lessons she learned on her yoga teacher training with Esther Ekhart. 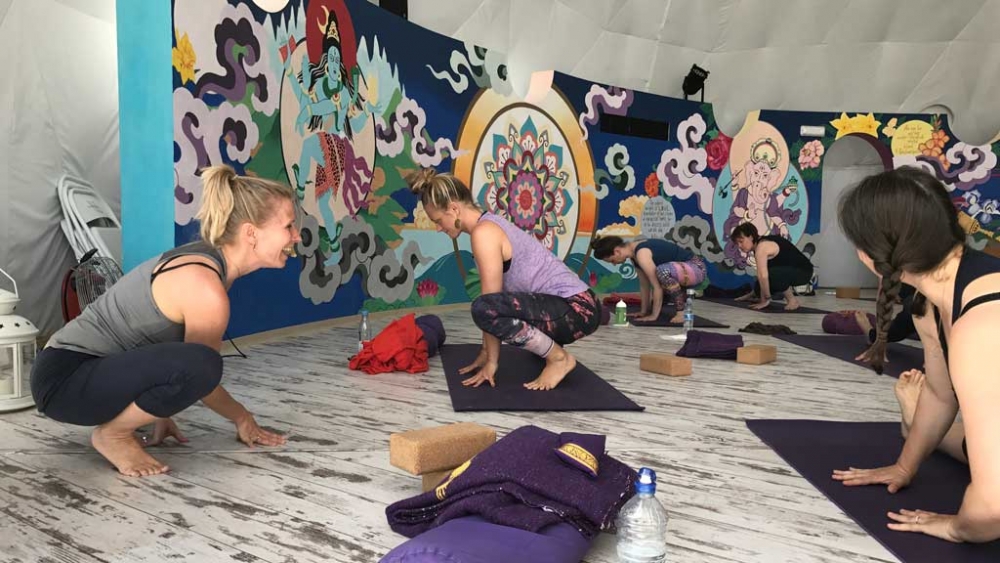 I live in the San Francisco Bay Area, where there are yoga studios and yoga teacher trainings offered on practically every block. Why, then, would I ignore the teachers on my doorstep and instead fly to Spain to study yoga with Esther Ekhart?

Esther has been my teacher since long before I moved to the Bay. I watched her videos while living abroad in Vietnam, Guatemala, and Colombia. Whenever I was anxious, suffering from culture shock, or feeling disconnected, an online class with Esther helped me re-center. Her focus wasn’t just on physical postures, but also on cultivating gratitude and self-acceptance.

Although I’m sure I could have attended many teacher training courses in San Francisco or Berkeley, I felt that I wanted to meet the person who had unknowingly guided me through stress and woe, and who had played a role in my life as a sort of fairy godmother: call on her in times of need, and she arrives, usually with just the kind of magic you need at that moment.

As it turns out, I wasn’t the only person who felt this way. Twenty other women viewed Esther in a similar light and had valued her presence and teachings enough to invest in her three-week training. We could all bond over certain things: our attraction to her gentle, do-what-works-for-you approach to yoga, our admiration for the sense of peace that she radiated through the screen, and our recognition of her yoga outfits from times we had seen her in videos (“Those are her leggings!” we chirped. Of course they were, whose else would they be?!)

Of course, Esther wasn’t the only teacher: she had invited Tracey, Gilda, and Jennilee to impart their wisdom as well. Quadruple fairy godmothers! With their guidance, I learned three main lessons:

In my years of being a yoga student, cueing was something like the weather: it went unnoticed unless it was particularly bad. I took for granted all the intelligent alignment instructions I had heard from EkhartYoga teachers, not knowing just how carefully they had chosen their words in order to elicit the best response from the body. You don’t ‘push’ into the mat, but ‘press’ into it—the latter connoting gentle strength without aggression. ‘Draw your hip bones towards each other’ elicits an engagement of the lower abdomen without the strain induced by ‘suck in your stomach’. Sometimes cueing works best by engaging the imagination: I learned to engage my pectoral muscles in Chaturanga because Jennilee cued: “pretend to scrunch the mat together between your palms.”

Intelligent cueing also means allowing for variations in poses based on differences in anatomy. I had often heard “pretend as if your body is pressed between two panes of glass” in Triangle pose, but for many people, this is actually less healthy than allowing the back hip to rotate slightly forward. All these cues were eye-opening for me: I had never realized how small differences in language have a subtle but significant effect on students’ positioning, muscular activation, and mental attitude in any given yoga pose. Sometimes, as in the two panes of glass scenario, certain oft-repeated instructions are even potentially unsafe, as they could lead a student to force their body into an injurious position (watch out for that SI joint!).

Since the yoga teacher training, I’ve become more mindful of the words I hear (or speak, if I’m teaching) in yoga classes: are the instructions precise, gentle, and informed by an understanding of anatomy? Choosing the best words while teaching yoga involves a lifelong practice of refinement and observation, and it’s fascinating once you dive in.

The balance of effort and ease

The second lesson I took away from the teacher training was that yoga serves us best when practised with a balance of effort and ease. I have always gravitated toward strong, perspiration-laced Vinyasa practices, out of a dual desire to challenge myself and to have my yoga practice double as my physical exercise, essentially killing two birds with one ‘Om’.

I had assumed since we all came to learn to be teachers, that our daily practices would be tough, sweaty, and challenging, so that by the end we would all be effortlessly balancing in Handstands. Although we did have some of these practices (thanks, Gilda!), the main goal was balance: a strong practice one day usually meant a slower or more yin practice the next. Far from being lazy or a cop-out, balancing strong practices with slower or more yin practices shows that you have the wisdom to prioritize mind/body equilibrium over, for example, a compulsion to burn calories or lose weight.

Interestingly, this balance of effort and ease applies to teaching as well: when I was too focused on the cues I had rehearsed, or overly analytical about the way I was demonstrating postures, I lost the joy and fluidity of teaching and came off as stiff and nervous.

In the physical practice of yoga, the ability to apply effort while still maintaining ease often means only activating the muscles necessary for a pose, and allowing non-active muscles to rest. In the practice of teaching yoga, balancing concentration with ease is more of a mental game: if effort is bordering on perfectionism or stress, it’s time to smile and relax.

The third thing I gleaned from the yoga teacher training was the sense of how crucial it is for yoga teachers to be able to observe their own minds without judgment. I had already learned from Buddhist meditation how valuable it is to practice the conscious observation of mental phenomena as it shows up in the mind. What I hadn’t realized was that this practice is not merely for one’s own benefit, but is also essential so that others can feel emotionally safe in one’s presence.

Deep hip openers, for example, sometimes invite strong emotions to arise. Emotional pain seems threatening, which is why we so often run away from it. Feeling the sense of calm which underlies the vacillations of the mind is essential for a yoga teacher so that she can show others that it is safe to sit with difficult thoughts as they arise. Esther writes about this in her blog post ‘Face your emotional issues to become a better yoga teacher,’ and I believe it is this aspect of mindfulness and self-compassion that shines through the most exceptional teachers. It is impossible to fool students by acting as if you have achieved a level of spiritual maturity that you haven’t; just like anything, you’ve got to do the work.

What I learned from the teacher training will continue to influence my thoughts and experiences through the rest of my life, and I think many if not all of my fellow trainees feel the same. Although it’s arguably silly to leave the San Francisco yoga hub to learn about yoga, I couldn’t resist the urge to meet my years-long virtual yoga teacher in person, and I’m grateful that I did.

The reason Esther’s classes are so memorable is that the lessons apply holistically to our lives: learning to use words to the best possible effect, balancing effort and tranquility, and witnessing one’s own thoughts and emotions are techniques that could be practiced whether one is doing two rounds of Sun Salutations or stuck in bed with two broken legs. Whereas yoga, for me, was once a compartmentalized activity that started with www.Ekhart and ended with Yoga.com, it now resides in the mind as well, which is even more ubiquitous than wifi.

Train with Esther in person

If you’re interested in doing a yoga teacher training course or workshop with Esther, or any other of the teachers on EkhartYoga, head over to our workshops page.

Learn how to create safe, balanced and inspiring yoga sequences in Esther Ekhart’s 6-hour online course on the EkhartYoga Academy – The Art of Sequencing.

Angela Allan was born in the Philippines and now resides in Berkeley. Her passions are yoga, hiking, writing and doodling on most surfaces. Her poetry can be found here.