Anatomy of the side body stretch

Have you ever wondered what is actually happening in postures like Seated Side Stretch, Gate pose or Revolved Head-to-Knee pose? 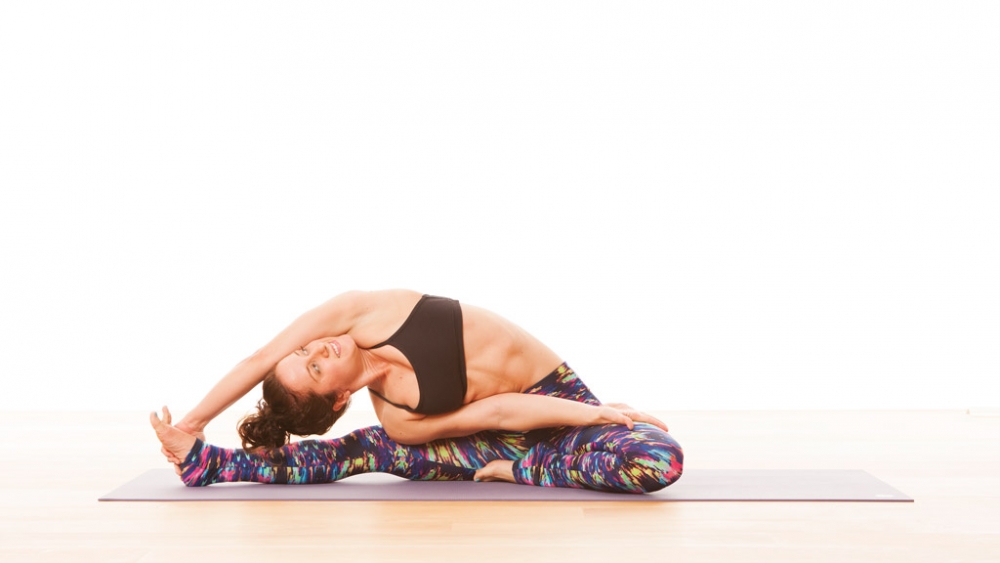 Have you ever paused to question, “Just how am I supposed to lengthen both side bodies in Extended Triangle, Half Moon and Extended Side Angle? And what side body muscles do we “engage”, “activate” and “strengthen” in postures like Side Plank and its many variations?

In this article let us dive deeply into the layers of our human body and support what we are feeling in our side body stretching and strengthening postures with our ever-evolving anatomical knowledge.

Transitioning out of the sagittal plane

Most of us live a good portion of our waking lives in the sagittal plane of movement which is flexion and extension. Sitting at a desk, driving a car or a bike, eating at tables, watching TV on couches, running, hiking, rowing, and even checking our smartphones – all of these activities take place in flexion (forward bending out of a neutral standing position).

When we come to the mat to practice yoga we please the systems of the body by transitioning out of this habitual plane of movement into the other two (coronal where abduction, adduction and lateral flexion take place and transverse plane where rotation takes place). And, because we mostly only live in one aspect of sagittal (flexion) the body also delights in yoga backbends!

Muscles stretched and strengthened when working on the side body

Whenever we expand out of our sagittal plane into the coronal plane – in postures such as Side Plank, Half Moon, Extended Hand to Big Toe and Extended Side Angle – there are major muscles on one side of the body working (agonist) and major muscles stretching (antagonist).

Quadratus Lumborum is a deep postural muscle that originates from transverse processes of L1-4 and medial half or Rib 12 and inserts to the posterior portion of the Iliac Crest. You have one on the right side of your spine and one on your left. The primary job of the QL as an agonist is to take the spinal column and laterally flex it to one side or the other. When one of your QL’s are engaging to make side-bending possible the other QL (as an antagonist) is relaxing/stretching. When both QL’s are working together they aide the Erector Spinae in extension.

Muscles that help out your Quadratus Lumborum (synergists) are External and Internal Obliques, Erector Spinae and Latissimus Dorsi. Habitual patterns such as leaning while driving, carrying a baby/small child on one hip versus the other, carrying a heavy bag/briefcase/massage table to work, and always reaching down on same side in activities such as shovelling and/or hauling encourage a tight Quadrates Lumborum on one side. Having one leg longer than the other, scoliosis and/or experiencing some sort of Sacral-Iliac joint misalignment can also lead to QL tightness.

Latissimus Dorsi is the largest/broadest muscle of the back. Often referred to as the “Lats” the fibres of this muscle make up your “bat wings”. Originating from the spinous processes of T7-L5, Thoracolumbar Fascia, Iliac Crest, bottom 3/4 Ribs and inserting into the Medial Humerus its primary job as an agonist is to take your arms from an overhead position and draw them down towards your side body.

Often the Latissimus Dorsi will have Teres Major, Posterior Deltoid, Triceps and Trapezius as synergists. Your Lats are working in postures such as Upward-Facing Dog and Pendant/Scales and are stretching nicely in Downward-Facing Dog and Child’s pose.

A deeper stretch is experienced in arm-over-the-head side bending postures such as the Seated Side Stretch and Extended Side Angle because adding the side-bend increases the distance between the origin and the insertion on one side. Most people do not effectively utilise the Latissimus Dorsi’s strength capabilities of pulling the body though space and time.

Gymnasts, swimmers, body-builders, utility pole climbers, rowers and aerialists are some of the yoga practitioners that may feel the most tightness or restriction in side-body stretching postures. Also, anyone stuck in the habitual pattern of carrying a heavy bag, briefcase, suitcase, tool bag or massage table on one side of body also is likely to feel the over-the-head side body stretch in the Lats.

In Side Plank, arms are drawn away from body with Anterior Deltoid and Suprasinatus.

To strengthen Latissiumus Dorsi energetically draw the planted hand towards the lower foot. This will fire up the whole side body in this pose (Gluteus Medius and Tensor Fascia Latae as well).

In standing balancing yoga postures it helps to stabilise the standing leg/hip by activating all fibers for joint integration (Femur into the Acetabulum of the Ilium). Lateral fibers are working (and are assisted by Gluteus Minimus) to lift leg in abduction in Half Moon pose and leg-lifting variations of Side Plank.

Tensor Fascia Latae (originating from Iliac Crest and inserting on the Ilio-Tibial Band) helps with hip stabilisation while standing, walking and running. It also abducts the Femur. If this muscle is tight it will pull and increase tension on the IT Band (a thick band of fascia originating from the Iliac Crest and inserting below the knee into the Tibia) which can lead to knee pain. It is very hard to stretch the IT Band because of its dense fibrous quality (I heard it once described as a cross between a ligament (connects Ilium to Tibia) and a tendon (muscles attach to it).

An effective way to alleviate issues from a tight IT Band is to massage it (using a foam roller) and to stretch the muscles attached to it (TFL and Gluteus Maximus).

The three Peroneus muscles (also known as the Fibularis muscles) all originate from superior Fibula and insert onto the forefoot bones (Metatarsals). These lateral lower leg bones are responsible for everting the foot (think of the ankle closest to the top of a hill when walking around the hill, or the straight leg ankle/foot in Wild Thing). They also help with flexing and extending the ankle (Peroneus Longus and Brevis plantar flexes and Peroneus Tertius dorsiflexes).

All of these muscles get quite an effective stretch in open hip postures such as Gate, Warrior 2, and Extended Triangle. Adding a leg-cross to Standing Side Bend (think of Bikram Yoga’s Half Moon), Standing Forward Fold or Ragdoll increases the stretch felt along the outer thigh and lower leg.

Walkers, runners, cyclists, skiers and bellydancers can experience tightness in Gluteus Medius and Tensor Fascia Latae. If walking or running consistently on the side of a hill, on a beach or on any uneven terrain, Perroneus muscles can be included in that tightness.

Often, people that stand for a living or cross their legs as a habitual pattern, and middle-aged women (for many women their hips are wider than their gait putting extra stress on the walking muscles) Gluteus Medius and TFL can also be tight (and more often the tightness leads to weakness). Adding old-school “Jane Fonda-esque” leg raises (lying down, all fours and in Half Moon pose to any yoga practice will ensure the strengthening of Gluteus Medius and TFL.

Other benefits of working on the side body

Yoga postures affect much more than just our muscles. It is important here to mention some of the immense benefits on other systems of the body whilst side stretching and strengthening.

In addition to feeling taller, longer and lighter you will also experience great benefits for your cardiac, respiration, digestion, lymphatic and endocrine systems.
SHARE QUOTE

Side stretching releases tension from the muscles that attach to the ribs (Quadratus Lumborum, Latissimus Dorsi, Serratus Anterior, and the Obliques) and the intercostal muscles between the ribs themselves, allowing the ribs to express their full range of motion and the lungs to effectively respond to the increase and decrease of volume. The diaphragm (major muscle of breathing) and the chambers of the heart all get stretched as well, especially in postures such as Reclined Hero with arms reached overhead.

The lymphatic system, unlike the cardiac system, does not have a pump to propel lymphatic flow throughout the body. Lymphatic fluid is derived from interstitial fluid (fluid between cells) and collects bacteria to bring to the lymph nodes where it is destroyed. The best way to help detoxify the body and move the lymphatic fluid along is to rebound (up and down movement i.e. running, skipping, trampolining) and stretch. Arms overhead side body stretching affects the lymph nodes in the auxiliary region (armpit) and the region of the spleen (lymphatic organ) itself.

Jennilee TonerJennilee has the best job in the world…travelling the world and teaching four of her passions: yoga, human anatomy, injury prevention, and mythology of the asanas.
Follow
Anatomy
Play
Pause
Connect
Support
About
Apps