An introduction to mudras

We take a look at the meaning behind mudras - hand gestures. 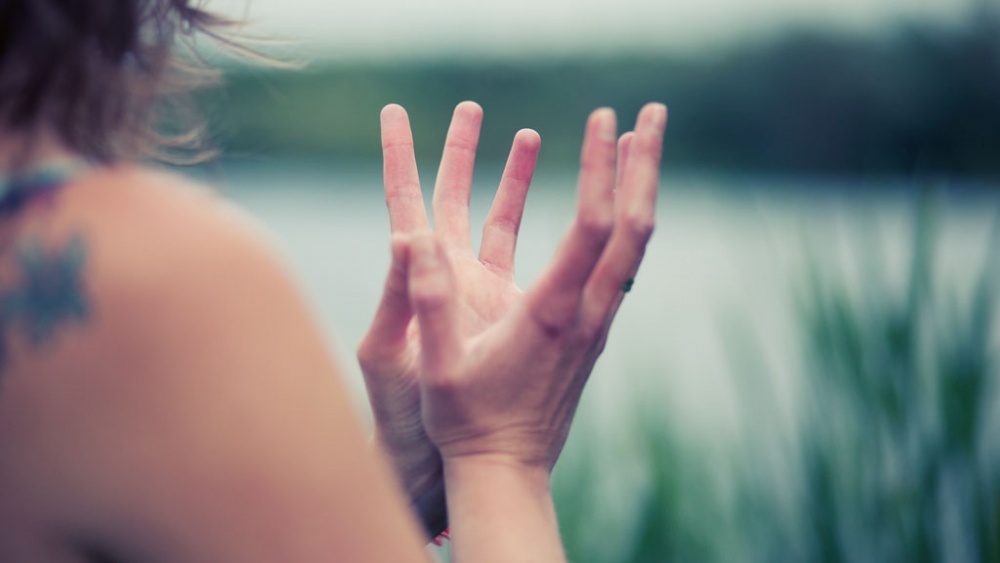 The image of someone in a lotus position with their thumb and forefinger touching is synonymous with yoga and meditation. But is there more to this hand gesture than meets the eye?

Mudras – meaning ‘seal’, mark’ or ‘gesture’ in Sanskrit – are said to intensify the effects of our yoga or meditation practice and enhance the flow of energy. But how does this work and when should we use them?

The specific origins of mudras are unknown although they’ve been around for thousands of years and have appeared in varying religions and traditions including Hinduism, Buddhism, Christianity, Egyptian hieroglyphics, Tantric rituals, Roman art, Asian martial arts, Taoism and Indian classical dance.

The purpose of these hand gestures can vary according to tradition – from focusing subtle energy, transmitting teaching through symbols, acting as a tool for healing illness, even attributing magical powers and psychic abilities to the practitioner! Essentially though, mudras are a form of non-verbal communication – an ‘external expression of inner resolve.’

Mudras in yoga and Ayurveda

In yoga and meditation we often use mudras alongside Pranayama (yoga breathing exercises), usually when seated cross-legged in Sukhasana, Virasana or Padmasana. Mudras are also incorporated into the physical practice of yoga asana – see picture of David Lurey in Natarajasana – Dancer’s pose.

Performing mudras are said to stimulate the flow of prana (life force or energy) throughout the body, to quieten the mind by focusing it on the simple touch of our hands or fingers and to intensify the power of our practice.

According to Ayurveda – considered to be the world’s oldest holistic healing system and often described as yoga’s ‘sister science’ – disease is the result of an imbalance in our body caused by a deficiency or an excess one of the five key elements: space, air, fire, water and earth. Each of these is said to play a specific role within the body and are represented by the five fingers:

The fingers essentially act as electrical circuits and the use of mudras adjust the flow of energy which balance these various elements and accommodate healing.

There are hundreds of mudra variations, some of which involve the entire body (including the eyes and the tongue), but the most common are performed with the hands and the fingers.

1. Jjana mudra – the mudra of wisdom or knowledge

Also sometimes spelt Gyan or Gyana mudra. Join the tip of index finger against the tip of the thumb and let the other three fingers extend gently away. If seated, rest the back of the hands onto the thighs with the palms facing upwards.

By connecting the thumbs and forefingers with the palm facing upwards in a gesture of receptivity, we’re uniting these two elements – the Self and the universe. The circle we make with the index finger and thumb also creates a ‘seal’ or ‘pranic circuit’ so that the energy flows back into the body rather than ‘leaking’ from the ends of the fingertips.

2. Chin mudra – the gesture of consciousness

Like Anjali mudra, Chin mudra is often incorporated during meditation. The thumb and index fingers touch lightly together, as above, but this time the palms face downwards on the knees or thighs. Chin Mudra is often confused with Jjana Mudra as they look so similar the but direction of the palms downwards signify a different meaning. This more introspective gesture is said to have a grounding effect, encouraging our attention and focus to move inwards.

Anjali, (derived from anj meaning ‘honour’ or ‘celebrate’) is Sanskrit for “divine offering”, “a gesture of reverence” and is often used in conjunction with the utterance of the word ‘Namaste’ at the end of contemporary yoga classes. Anjali mudra is also used during the physical part of yoga practice (Asana) – for example in Tadanasa, Vrksasana and as part of the Surya Namaskar sequence.

To do it, bring the palms together, and place the thumbs lightly on sternum with the fingers pointing upwards. Press the palms evenly together, noticing whether the pressure is more intense in the dominant hand. Bow your chin towards the thumbs whilst bringing the back of the head slightly back. Try and lift the sternum up towards the chin, rather than dropping the full weight of the head.

Joining the palms together is said to unite the right and left hemispheres of the brain, symbolising our connection to ourselves and to others. This mudra is often accompanied with the word ‘Namaste’, generally translated as ‘The light in me bows to the light in you’ – a humble gesture or offering, honouring the union between one heart and another’s.

Practice all three – for EkhartYoga members

An introduction to Mudras – in this short video Francesca introduces the most practised Mudras in Hatha Yoga: Jnana, Chin and Anjali (Atmanjali) Mudra – 15 mins, meditation

Kirsty TomlinsonKirsty took her yoga teacher training with Esther Ekhart in 2013 and moved to the Netherlands from the UK to work for EkhartYoga in 2015. She's previously worked in publishing, graphic design and legal recruitment. Her role at EkhartYoga is a varied one - content creator, teacher manager, copywriter, and dog lover. You may recognise her beloved canine, Hunter, hogging the limelight in several of our classes!
Follow
Spirituality
Play
Pause
Connect
Support
About
Apps

All bonuses and promotions at Zodiac Casino are processed by Casino Rewards, essentially the most competitive online loyalty program. Bitcoin Dice Added bonus Codes Obtain the latest Bitcoin Dice added bonus codes at no cost rolls, no deposit bonuses, coordinated promos, acceptance benefits and extra. We have the most effective provably reasonable $2 deposit casino going BTC sites and by subscribing may discovered immediate standing whenever the model new offers are put-out. You’ll discover wagering necessities on exactly the method to change additional finance to your money financing.