Vinyasa Flow transitions and how to safely navigate them

Safely navigate through some of the more common Vinyasa Flow transitions like knees down to Cobra or Chaturanga to Upward Facing Dog. 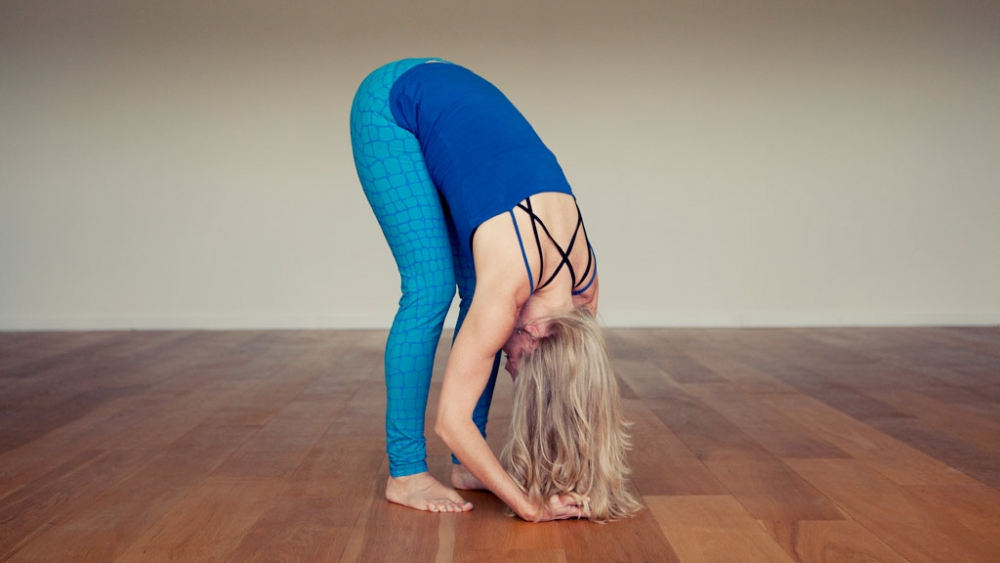 In this article we look at how to safely navigate through some of the more common Vinyasa Flow Transitions. Taking into consideration the many schools of thought, the dialogue here is from a purely anatomical point of view.

Due to inherent and/or accumulated differences in people’s bodies, some of these transitions may not be injurious for some. However, depending on a given body, past injuries or trauma, and/or habitual patterns from work or play, for others they may be extremely so.

Also, gravity and where the body is positioned accordingly is always a factor to consider for many of these transitions.

1. Rolling up from Rag Doll to Mountain Pose

Recently there has been quite a debate over whether or not we should roll up from Rag Doll. The main reason cited for not rolling-up is that the natural curve of the lower 5 lumbar vertebrae is concave (unlike the thoracic and sacral regions of the spine). Therefore rounding up is literally not possible.

This said, we humans have been “rounding” our torsos with our abdominal muscles for a very long time. Yogis round their torsos quite safely in postures such as Head-to-Knee, Rabbit, Plough and Star.

It is the transition FROM the rounding that can be possible injurious due to intervertebral disc issues, weak erector spinae muscles, weak quadratus lumborum muscles (often in conjunction with tight PSOAS muscles), weak abdominal muscles and improper technique.

If rounding up is something you want to practice remember that because gravity wants to pull you down and you are working your muscles to react against gravity, you must soften your knees to release tension in both hamstrings and lower back and tuck tailbone slightly (engaging the necessary support of the lower abdominal muscles) before rounding up. If you have the above mentioned weak muscles you can always place hands on thighs for support as you engage front and back torso muscles to “roll up” to standing OR soften knees, place hands to hips and, using the strength of your back extensors, unhinge at hips to arrive in Mountain pose (choosing not to roll up/round up at all).

2. Knees Down to Cobra OR Chaturanga to Upward Facing Dog

One of the most common transitions we practice in vinyasa flow yoga is Chaturanga Dandasana to Upward Facing Dog to Downward Facing Dog. If done properly it is quite the satisfying cleansing of the palette between standing and floor sequences. If done improperly it can lead to repetitive motion injury to shoulders, elbows, neck and lower back (see the 5th article in my injury prevention series Joint Integration: Preventing Yogic Injuries for how to practice a safe Chaturanga).

It is important to hold your body like a rod in high plank, keep this form as you shift your body forward from this high plank and lower yourself down to hover in Chaturanga (not breaking the plane of your upper arms or ribcage) before gliding forward to Upward Facing Dog (knees or hips never touching the floor). If you are unable to do this then the safest transition in your Vinyasa flows is knees-down-lie-down for Cobra.

For the muscles, tendons, ligaments and bursas of both the shoulder and elbow it can be injurious to hang your whole body weight on the shoulder and elbow joints while lowering from high plank to the floor. There is less weight bearing/load bearing on elbows and shoulders if the knees are placed on the floor before lowering down. For the lower lumbar vertebrae it can be injurious to press up from the floor into a “pseudo” Upward Facing Dog (straight elbows) with knees and thighs on the floor (too much lower back compression).

Rule of thumb: If your knees are touching the floor your elbows need to be bent (COBRA) and if your knees and hips are off floor your elbows can be straight (UPWARD FACING DOG). Think LENGTH of spine (especially in faster, more dynamic flows) versus deep compression of the spinous processes of vertebrae (back of the neck as well as lower back).

*There are advanced variations of Cobra that allow for straight arms. For the safety of the lower lumbar vertebrae it a good choice to save these deep backbends for the backbend portion of your practice where backbends are clustered and held for longer periods of time.

Other schools prefer to cluster closed hips postures together into sequences that are separate from open hip posture sequences.

The most common example of closed hip to open hip is Warrior One to Warrior Two.

Warrior One to Warrior Two

A few things to notice about these two postures:

– If we don’t move our feet in this transition the front knee will be too far forward of the heel putting unnecessary pressure on the patella and its tendon attachment on the tibia.

– What happens when we do move our feet between the two postures is that a “grinding” action can occur in the hip – especially if there is no lift of the body in the transition (Inhale lift out of Warrior One and then exhale open up and lower into Warrior Two).

– Even when there is a lift there tends to be a wiggling of the back foot into proper Warrior Two distance and this can cause “grinding” in the hip socket and in the ankle joint as well as a weight-bearing rotation of the back lower leg bones (tibia and fibula) which is not conducive to the health of the knee joint. Repetitive motion injury known as hip impingement can be an injurious result (wearing away of the cartilage that surrounds the “ball” (femoral head of the femur), wearing away of the lining of the “socket” (acetabulum in the ilium), and damage/tearing of the labrum, the cartilaginous lining of the rim of the hip socket).

The same grinding can happen in the transition between Warrior Three and Half Moon and between Half Moon pose and Standing Splits- mostly because of gravity and the weight of the body bearing down on top of the femoral head. As before, these transitions can be made safer by either lifting the leg up before turning OR better yet, putting one or two hands on blocks to transfer/disperse the weight from solely being on one leg into either one leg/one hand or one leg/two hands.

“there is the unnecessary risk of injury to the sacroiliac joint if the sacrum chooses to follow the movement of the spine rather than stay connected to the ilium.” – read Bone Alignment – Preventing Yogic Injuries

Remember though the inner workings of the hips…even with these stabilizing pauses in between postures you can still cause hip impingement.

The last transition to be discussed in this article is that of backward bending postures into forward bending postures. Previously mentioned was the need for length in the spine versus depth in the spine during the faster, more dynamic flow portion of the practice where there is much forward bending immediately followed by much back bending. Later in your practice, after the body is heated and all the systems (cardiac, respiratory, lymphatic, etc) are effectively challenged by the yang portion of your practice, in order for muscles to sufficiently stretch, poses are held longer in the yin portion. Now it is time to cluster the backbends (bridge, wheel, bow, camel, full pigeon) in order to go deep into the body and release tension, pause & stabilize the spine, and then cluster the forward bends to go just as deep.

Possible injuries can occur at a deeper level as well if the spine is not neutralized between backward bending postures and forward bending postures. In between each and every bone of the spinal column is an intervertebral disc which acts as a shock absorber – a fibrous ring surrounding a gel-like cushiony center. In addition to being a shock absorber, this disc of fibrocartilage acts like a ligament helping to keep the bones of the spine attached.

Ways to stabilize the spine

It is not conducive to the health of the intervertebral discs to go directly into Child’s Pose after Camel/Floor Bow or directly hug knees into chest after Full Wheel/Full Pigeon. However, once the spine is neutralized (after few or many breaths) then it’s time to transition safely into the forward bending portion of your practice.

Why I’m so passionate about SAFE vinyasa flow yoga

For me, inhaling and exhaling my way through an intelligent and creative vinyasa yoga sequence is one of the most exhilarating, harmonizing and life-affirming daily practices. (Next to hiking with my dogs, hugging trees, watching sunrises and sunsets, and of course, making the sweetest of love).

My passion for safe Vinyasa flow yoga shines through in my teaching because I am so excited for others to experience what I feel on the mat:

A lover of human bodies and a lover of vinyasa flow yoga – my hope is for the longevity of both.

Jennilee TonerJennilee has the best job in the world…travelling the world and teaching four of her passions: yoga, human anatomy, injury prevention, and mythology of the asanas.
Follow
Vinyasa FlowAnatomy
Play
Pause
Connect
Support
About
Apps