Learn some different ways to set up Saddle pose so you can adapt it for your own body. 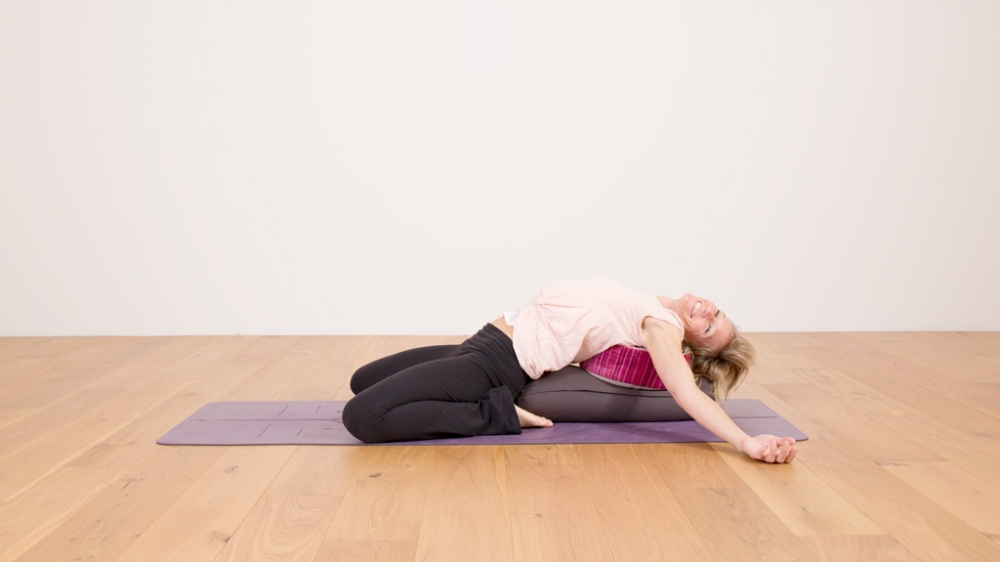 Saddle is a Yin yoga pose targetting mostly the large quadriceps group of muscles on the front of the thighs, as well as the hip flexors and the rectus abdominis – or ‘six pack’. It also gives some gentle compression to the lower back. The quads and hip flexors are rarely stretched in our daily lives and can quite often be stiff and short. So for many of us, spending any time in Saddle pose can be pretty intense – but as Anat Geiger explains in her class, Yin to Saddle, practising it is a great way of training your nervous system to relax under stress!

In this short YouTube video, José de Groot teaches some different Saddle Pose Variations so that you can adapt it to your own body and play with targetting different areas within the pose.

Saddle pose is similar to Supta Virasana (Reclined Hero pose) but with some key differences:

Length of hold – In Yin yoga, poses are held for longer periods, up to 5 minutes, to access the deeper connective tissues (read why in The Benefits of Yin Yoga). In a Hatha or Vinyasa Flow yoga class Supta Virasana is more likely to be held for 5 to 10 breaths.

Stimulating the lower back – In Supta Virasana the tailbone is lengthened, while in Saddle pose the intention is that there should be a gentle compression in the lower back (a feeling of pressure but no pain or pinching). This is to target the L5 vertebra and the dense mass of connective tissue surrounding it. Watch Anat’s Yin to Saddle class for more about why this is important, especially as we get older.

Practising functionally – Supta Virasana is generally taught with the knees together and the “full-expression” of the pose is with the bum sitting in between the heels. However, in Yin yoga there is a stronger emphasis on practising functionally; adapting a pose to suit your body’s individual bone structure, tissues and proportions, until you are stimulating the target area (the quads in this case). For a talk and class on this topic watch José de Groot’s class Opening up your front body – practicing functionally.

This is not to say that other styles of yoga don’t allow for any adaptations or are focused on the shape of a pose above all else. Practising functionally isn’t exclusive to Yin yoga, but it is one of its key principles and so Saddle pose can look very different from person to person.

Some variations of Saddle pose

Before you begin to lean back, set up your seat so that your hips are comfortable.

Internal / external rotation of the hips

Internal rotation or external rotation refers to the position of your thigh bone (femur) in the hip socket. Our hips are naturally going to be more comfortable rotating one way more than the other due to various factors (see Yoga Hip Openers). José shows you an easy way you can test this in the video above. If your hips are more internally rotated you might be able to sit comfortably between your heels in Saddle pose. If they are more externally rotated, try sitting on your heels or up on a cushion or block placed between your feet. Experiment with your knees together or apart.

Sore ankles / tops of the feet

If you have any strain on the front of your ankles because they are not flat on the ground, make a roll with your blanket and put it under your ankles where they bend – this also works well for Child’s pose.

Pressure on the calf muscles

If the pressure of the thighs on top of the calf muscles is too much, use a pillow and sit on that so that your hips are higher. You can also fold a blanket a place it between your thighs and calves. This will also take out some of the flexion in the knee.

As you begin to lean back, take it slowly bringing your hands behind you and perhaps coming onto your elbows if it feels ok. Keep checking in that you are feeling the sensation in your quads and not just in the knees.

Pinching in the lower back

There should be some compression in the lower back and this is one of the benefits of Saddle pose in comparison to Supta Virasana. However, if you experience any pinching – or the compression is too much – use cushions and extra props to raise your upper back.

If you are in Saddle pose but not feeling the sensation in your quads try some one-legged variations. Bring your right leg into Saddle pose and bend your left leg so your knee is pointing up with your foot flat on the floor. This takes out some of the tilt in the pelvis and gives an extra stretch in the quads instead. You can also use one-legged versions to target different areas of the quads as Jose shows in the video.

For a longer Yin yoga class on Saddle pose: 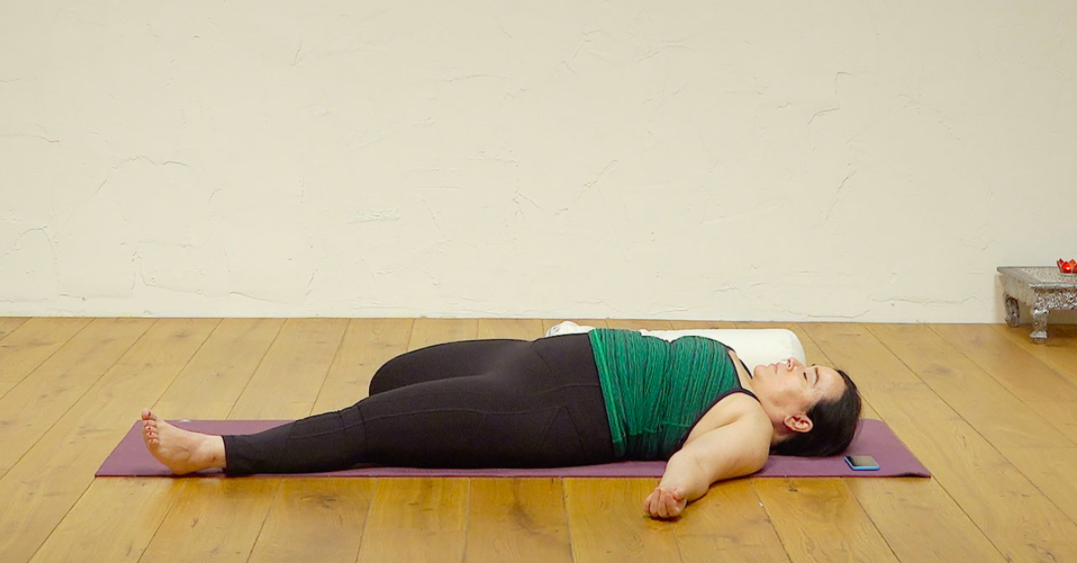 Yin to Saddle with Anat Geiger

Saddle pose is one of the most feared and avoided poses of the Yin yoga vocabulary, but its benefits are many and unique: it deeply affects the fascia around the sacrum and the lower lumbar vertebra, an area that can become rigid and stiff. We work slowly with postures that affect the back and pave the way towards Saddle pose and, of course, lots of options and props are offered.

Jenny SavageJenny Savage is part of the EkhartYoga team behind the scenes. She first started yoga at the age of 15 and took her teacher training with Esther Ekhart in 2013. She has a background in Health Psychology, community mental health work, and health and wellbeing research.
Follow
Yin yogaAnatomy
Play
Pause
Connect
Support
About
Apps