We take a closer look at the Primary and Intermediate series of Ashtanga Yoga. What are they and when can we progress through the series? 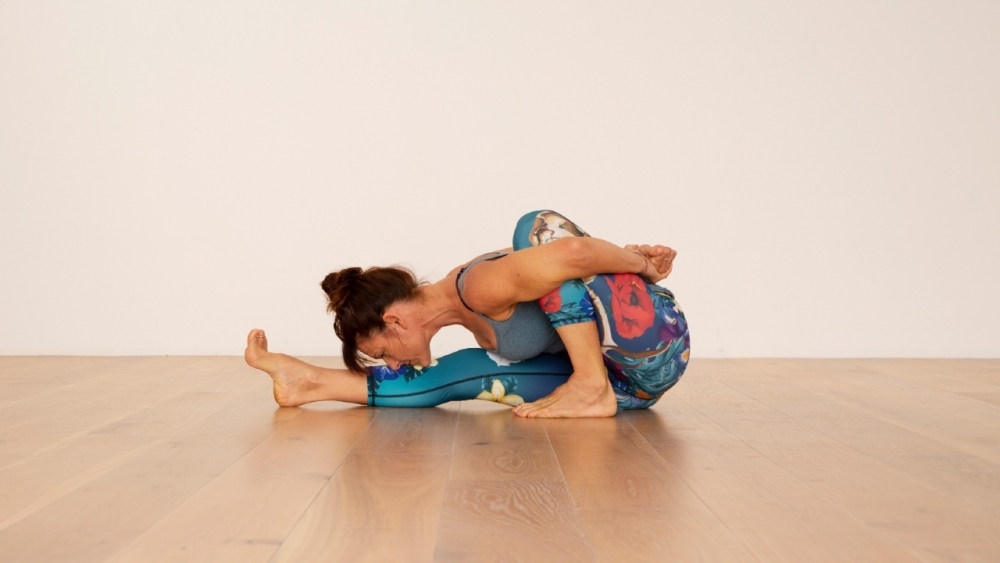 Ashtanga Vinyasa Yoga is made up of six series (Primary, Intermediate and four Advanced Series) each of which has a set order of poses.

Each of the six series begins with Surya Namaskara (Sun Salutations) 5 of the A variation and 5 of the B variation, followed by the standing sequence. All the series end with the same finishing sequence. It is only the middle section which has a different group of asanas and focus depending on the series. Traditionally the poses are always practised in a specific order and are taught in a Mysore style with the teacher giving the practitioner a new pose when they feel they are ready. Read more about the background of Ashtanga Yoga.

The Ashtanga Primary Series is called Yoga Chikitsa, meaning yoga therapy, because of the cleansing and toning effect it has on both body and mind.  On a physical level the asanas (poses) of the Primary Series build strength and flexibility in the body, loosening tight muscles and realigning and detoxifying the body and nervous system. The series begins with forward bends, then twists and hip openers with a vinyasa between each asana.

On a mental level, through regular practice focus, willpower, mind-body awareness and confidence are improved as we overcome the mental obstacles to our practice. On a subtle level the Primary series works therapeutically to clear obstacles in the energy channels in the body (known as Nadis).

This clearing of obstacles allows the Prana to flow more freely so the body and mind are therefore allowed to work more effectively.

The Ashtanga Intermediate Series or second series, is known as Nadi Shodhana – meaning Nerve Cleansing. This is because of the focus on backbend asanas. The backbends encourage and maintain the suppleness of the spine and as well as working on opening the energy channels allowing Prana to flow freely. (Nadi Shodhana is also the name given to Alternate Nostril Pranayama).

While some of the earlier asanas in the sequence may be familiar to many (Locust Pose for example) the Intermediate series sequence moves onto more intense backbends, hip opening poses and headstand variations.

The poses have their own health benefits and challenges but the specific combination of the poses works strongly on the nervous system, so it can have a very different effect on the body than the Primary series or other dynamic yoga classes. It’s therefore really important to end your practice with a long Savasana and as you start out practising the Intermediate series begin on a day when you don’t have too much going on.

How do you know when it’s time to move on to the Intermediate Series?

The Primary series itself is challenging and practitioners may stay with the Primary series for several years before starting to bring in poses from the Intermediate series. Traditionally the Ashtanga Yoga student would be told by their teacher when they are ready to move onto the next series. However, if you are not practising under the guidance of a teacher how do you know when you can move on?

Ashtanga Yoga teacher David Swenson says that it is not a question of “mastering” the Primary Series before moving on to the Intermediate Series. It is not a question of being able to do every pose to its full expression, rather the knowledge of how to approach the poses. There should always be room for learning more within the practice, otherwise we shut ourselves off from the possibility of growth. David’s guidance therefore is to be able to practise the Primary Series without stopping and without needing to refer to external resources like a book or video before entering the Intermediate Series.

Whether you are practising Ashtanga for the first time or are working through the Intermediate Series, remember to practice with awareness and patience and always return to the breath.

Asanas are not the goal. They are a vehicle to access a deeper internal awareness – David Swenson
SHARE QUOTE

Sign in or start your free trial to browse all our Ashtanga yoga classes.

Jenny SavageJenny Savage is part of the EkhartYoga team behind the scenes. She first started yoga at the age of 15 and took her teacher training with Esther Ekhart in 2013. She has a background in Health Psychology, community mental health work, and health and wellbeing research.
Follow
Ashtanga
Play
Pause
Connect
Support
About
Apps