The Rocket, a tribute to Larry Schultz

David Lurey on Larry Schultz, one of his most inspirational teachers and creator of The Rocket yoga class. 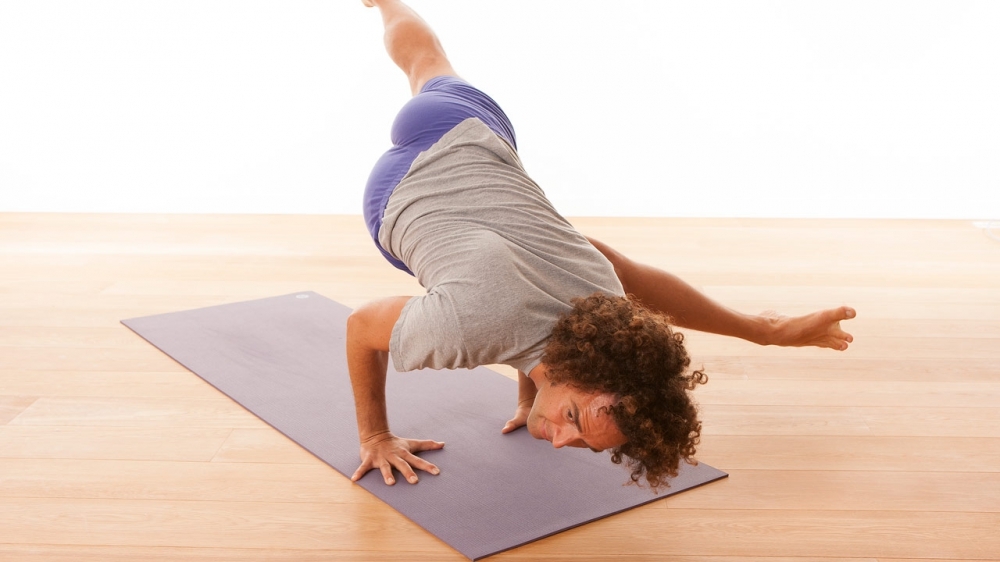 Meeting Larry for the first time

I remember very clearly walking into It’s Yoga on Folsom Street in San Francisco in 1995. I was there as a ‘guest student’ helping Jamie Lindsey, an employee of mine for his Yoga Teacher Training. He asked me to come take his class since he needed beginners to practice teaching. I wasn’t sure what to expect going to a Yoga Studio… and was very pleasantly surprised to walk in with the Grateful Dead jamming on the sound system, groups of people that could be from my social network hanging out and the sweet smell of marijuana coming from the bathroom!

Jamie welcomed me and got me sorted with a mat and a place to take the class, and just as I was about to sit down the bathroom door opened and Larry walked out with a smile that filled the whole room with light and a charisma that attracted everyone’s attention. After he made his rounds to the people he already knew, he came and said hello in a loud Texas / Jewish voice and I remember instantly feeling that this man could change my life. Almost 20 years later, Larry’s influence on my life has been one of the most profound and I am very happy to share his practice… “The Rocket” to the internet Yoga world.

The ‘Bad Boy of Ashtanga’

During my 7 years of practising with Larry, I was opened to a whole new universe of the modern yoga scene. Larry was affectionately known as the ‘Bad Boy of Ashtanga’ because after spending time with Pattabhi Jois learning classical Ashtanga Vinyasa Yoga, Larry became frustrated with not being allowed to move onto the Second Series and practice other poses besides the Primary Series. So he broke away from the ordered system but took many of the elements with him in his practice that became one of the main roots of Power Yoga. This rebellious spirit lived fully in the way that Larry lived his life and one of his more important gifts to all his students was his sincere authenticity. During a time when many yoga teachers were becoming ‘holier than the next’ and ‘more pure than the others’… Larry simply was who he was and earned my deepest respect for that.  He knew what worked for him and wanted to share it.

Larry was amazingly influential in the San Francisco Yoga scene of the 1990’s and beyond, and was even referred to as ‘the Mayor of Folsom Street’ (mostly by himself!) for his ways of bridging the gap between the austere and the social aspects of Yoga. In short… ‘It’s yoga’ (his studio) was ahotbedd of cross pollination. Asana, music, parties, dance and even some social and political actions came out of it. I remember practising side by side with Nicolas and Amanda, who are now MC Yogi & Amanda… David Kyle, Rusty Wells, Stephanie Snyder, Clayton Horton and others who are now influential Yoga teachers as well as rock stars, artists, political activists and more.

We had a weekly routine for the 6pm classes and Larry’s signature was Wednesday Night…The Rocket! A blend of poses from the 1st, 2nd & 3rd Series of Ashtanga Vinyasa Yoga.  It was a Power Yoga at its best and the yoga room, which could hold up to 50+ people, was packed. For what he was teaching, Larry was great. So much charisma and expression in his teaching… so many Yogic philosophy gems delivered like a stand up comic… so much positive encouragement. If the sequence didn’t make you feel good, Larry would.

The name “Rocket” comes from one of the guitar players from The Grateful Dead, Bob Wier. Larry was touring with the band and teaching them yoga classes and he would teach this sequence to the band. After one class, Bob said to Larry… ‘what is the name of this sequence… it’s great!”. Larry said he did not have a name for it, he just loved to teach it. Wier then said he should call it “The Rocket!”  Larry asked why and Wier said “because it gets you there faster!!” And it stuck instantly. Larry joked he never knew where “there” was… but he would get there faster anyway 🙂

As you practise it, remember to honour your body’s limits and trust yourself to move appropriately for your body on any given day. Although it may get you there faster, make sure ‘there’ is not an injury but an undefinable destination of self-love and honoring of your practice. Also, as this is a video class, feel free to hit the ‘pause’ button to try something again… and again… and again. There are usually 3 variations for the more advanced poses shown in one of Larry’s more memorable quotes, remember “the way you do anything… is the way you do everything.”  Do it with awareness!

The Rocket, A San Francisco classic

This class is free if you have an EkhartYoga subscription. Get yours here.

In sharing ‘The Rocket’ with the world wide web and on EkhartYoga, I hope to keep Larry’s vibrant rebellious spirit alive and trust that with all aspects of Yoga, we’ll get ‘there’ faster… and we aren’t in any rush!

David LureyDavid Lurey interweaves spiritual teaching themes into his teaching, along with intelligent sequencing, a heartfelt passion for music, and a dose of humour.
Follow
Play
Pause
Connect
Support
About
Apps