Yin yoga targets the deepest tissues of the body, our connective tissues – ligaments, joints, bones, and the deep fascia networks of the body – rather than the muscles (which are the physical focus of Yang yoga practices).

Origins and History of Yin Yoga

Holding stretches for long periods of time and other techniques closely related to Yin yoga have been practised for centuries in China and Taiwan as part of Daoist Yoga, which is sometimes known as Dao Yin. Taoist priests taught this knowledge, along with breathing techniques, to Kung Fu practitioners around 2000 years ago.

That Yin yoga was founded in the 1970s by martial arts expert and Taoist yoga teacher, Paulie Zink, is a common misconception. Paulie teaches a practice informed by his martial arts background, which over the years, has been called variously Taoist yoga and Yin and Yang yoga. It was, in fact, Paul Grilley who developed Yin yoga as we know it today. Its widespread popularity is due, in part, to Paul and his wife Suzee, along with Sarah Powers and Bernie Clark.

Philosophy and Principles of Yin Yoga

Yin yoga is based on the Taoist concept of yin and yang, opposite and complementary principles in nature. Yin is the stable, unmoving, hidden aspect of things; yang is the changing, moving, revealing aspect. In the body, the relatively stiff connective tissues (tendons, ligaments, fascia) are yin, while the more mobile and pliable muscles and blood are yang.

N.B. Yin Yoga requires the muscles to relax around the connective tissue in order to get a stretch, so not all yoga poses can be done safely or effectively when practising Yin style. Thus Yin asanas have different names.

Yin yoga poses are also designed to improve the flow of qi (or chi) the subtle energy that, according to Chinese medicine, runs through the meridian pathways of the body. It is suggested that these meridians are created by our connective tissue and that the improved flow of qi improves organ health, immunity, and emotional wellbeing.

What to expect in a typical Yin yoga class

A Yin yoga class usually consists of a series of long-held, passive floor poses that mainly work the lower part of the body – the hips, pelvis, inner thighs, lower spine. These areas are especially rich in connective tissues. The poses are held for up to five minutes, sometimes longer. Yin yoga is almost entirely passive, although some Yin asanas contain Yang elements. During the asanas, muscles are relaxed to avoid muscle spasm, which could result from engaging muscles for long periods. 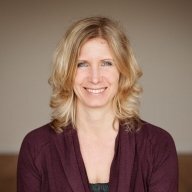 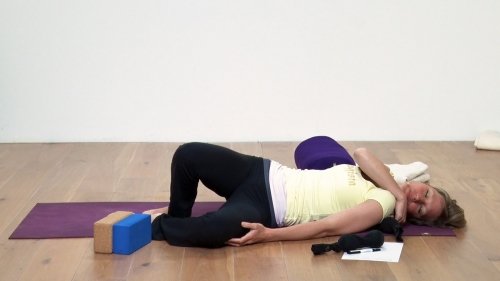 30:16
Back, shoulder and neck tension - be gone!
JosÃ© de Groot
Yin Yoga, Pranayama
Do you have a tired, tense and sore back, shoulders and neck, and practicing yoga doesn't seem to ease it? Then this session is for you! Using 4 tennis balls and 2 socks (I'll explain how we use these at the start) we apply acupressure and deep tissue release in specific areas along the spine. We start in the lower back and work our way up to the neck and shoulders. Be playful in how to position your body in order to find the juicy spots. If it's too intense, move away from the area a little, so you can relax more. Relaxation of the muscles we target is essential so that the pressure of the balls and gravity can work their magic. The idea is to completely surrender and let go. While tension is released, stored emotions can arise too; just allow them to come (and go). At the end we will slip into Savasana right away, so make sure you are comfy and warm when you practice. This is a great class to do before going to sleep. Props: 4 tennis balls and 2 sport socks, a pillow or bolster and a blanket.
All 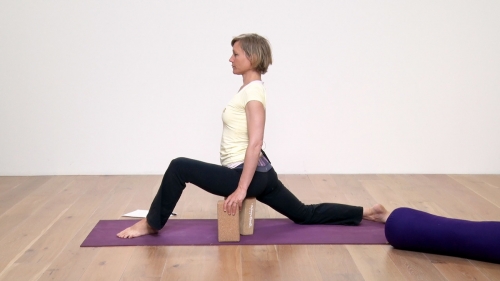 55:03
Mindfully moving towards the Splits
JosÃ© de Groot
Yin Yoga, Therapeutic
Would you like to be able to do the Splits (Hanumanasana) without hurting yourself? Before you do this class, it's helpful to watch Jose's short talk: 'I find the Splits challenging: help!' This will deepen your understanding of the function of Hanumanasana and what might be limiting you in the pose (tension or compression). In this class you will practice poses that gradually open up the tension in your hamstrings and hip flexors (muscles in the groin area). Flexibility in these areas are necessary to be able to do the Splits. Apart from tension you can encounter compression in your hips and lower back so modifications are offered. In order for you to still get the benefits of Hanumanasana, you need to let go of the â€˜perfect pictureâ€™ of the pose, and feel and listen to your body. When approaching Hamunanasana, being playful, mindful and accepting is the way forward. Props needed: bolster and 3 blocks.
All 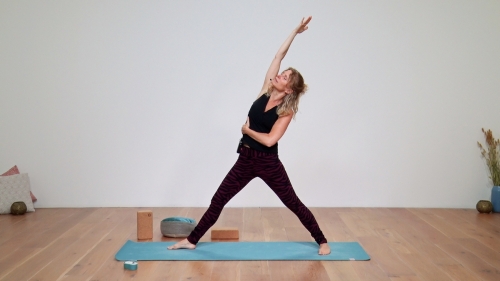 42:40
A space to relax and energize
Esther Ekhart
Yin Yoga, Pranayama
A lovely mix of Vinyasa flow to ignite some heat, and some Yin yoga to settle and soothe. We start slowly to relax and settle so we can be present for the ladder flow; a fiery flow that repeats and adds. We finish up with some more Yin to centre and ground. Enjoy, yogis.
All 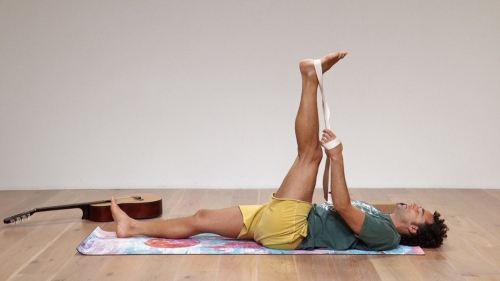 1:02:03
Movement, stillness and mantra (Yang Yin flow)
David Lurey
Yin Yoga, Therapeutic
Welcome to your personal, one-hour retreat. This practice has three â€˜wavesâ€™ of gentle Yang Asana, Yin poses and mantra. Wave one is for the hips and lower back with a lying-on-the-floor hip series, followed by a 3-minute squat and a mantra to finish. Wave two is for the shoulders and upper back with some mobilisation, a Shoulder bridge and a mantra finish. Wave three is for the middle back with a kneeling flow twist into 'Rolling Panda' Yin pose and, you've guessed it, a mantra to finish! Mantras: Jay Ma - Yopi Jay Shakti Ma - David Lurey Om Bhagavan: Manu Om 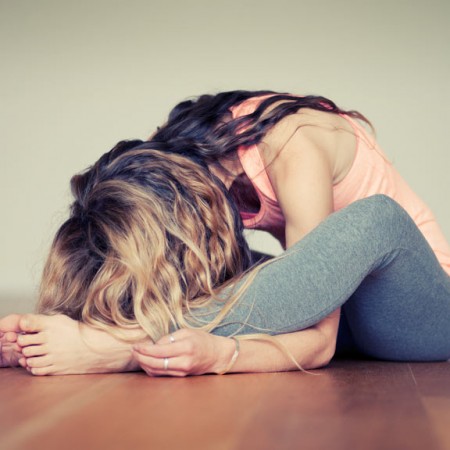 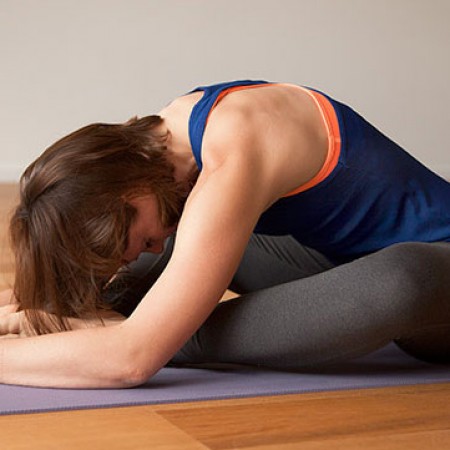