You don't need to know the names of all the muscles and bones to practise yoga but being familiar with some basic terms can help. If you don’t have a background in anatomy (or if your memory just isn’t what it used to be) this guide is your starting point. 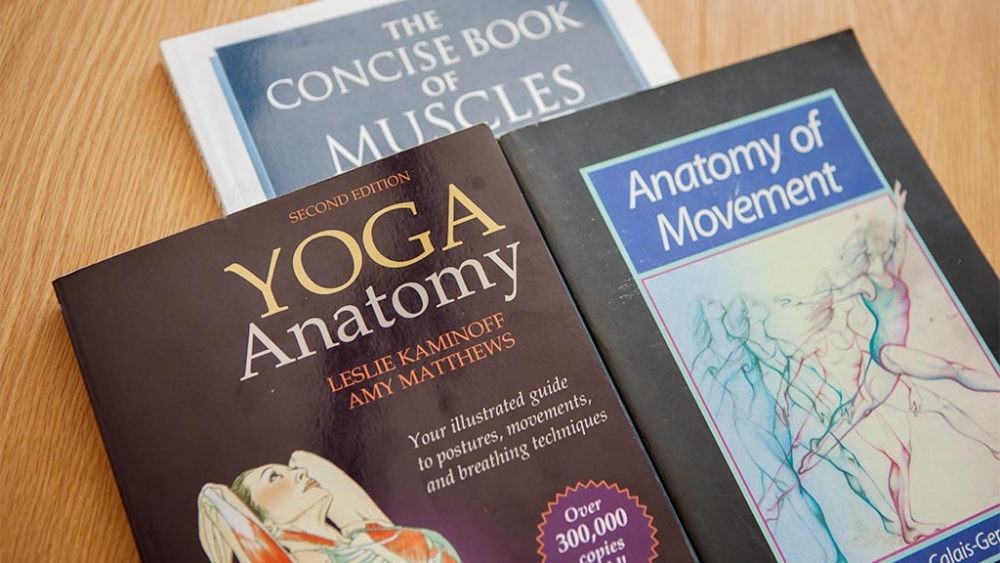 Parts of the spine

The spine is made up of four areas: the cervical (neck), thoracic (upper back, ribs), lumbar (lower back) and sacral(sacrum and tailbone). The cervical and lumbar curves in the spine are described as lordotic (inward or concave), while the thoracic and sacral curves are kyphotic (convex). The spine, skull, rib cage and sternum (breastbone) together make up the Axial Skeleton.

The pelvis is made up of the sacrum and coccyx (tailbone) at the back, and two hip bones. The hip bones start life as three bones per side – the ilium, ischium and pubis and eventually fuse together as we develop.

The sacrum is five fused vertebrae which form the triangular shaped bone at the base of the spine. The ilium join to each side of the sacrum at the sacroiliac (SI) joints. You may hear about the SI joint in yoga classes as it’s an area that can be vulnerable to injuries or imbalances.

The ischium bones are at the bottom and back of the pelvis. They have a larger part at the underside of the bones called the ischial tuberosity and it’s these bony protrusions you’ll hear described as the sit bones (or sitz bones/ sitting bones).

The three hip bones form a cup-like, concave structure called the acetabulum. This is where the head of the femur – the ball shape at the top of thigh bone – sits in the pelvis and creates the hip joint. The femur runs down to the knee joint where the patella (kneecap) is and meets the lower leg bones – the tibia and fibula.

The shape and position of the acetabulum varies from person to person, as does the angle of the head of the femur. This is important to consider in yoga as it could be the structure of your ball and socket hip joint which makes some poses seem easy or impossible, rather than flexibility or the amount of practice you put in.

The shoulder joint is made up of the scapula – shoulder blade, clavicle – collar bone, and humerus – upper arm bone. The humerus runs down to the elbow joint meeting the two bones of the forearm – the radius and ulna. As with the hips, the structure of the shoulder joint will play a role in how accessible some yoga poses are.

When something is anterior it is nearer to the front of the body. Posterior means closer to the back of the body. You might hear these terms in relation to the tilt of the pelvis. Anterior pelvic tilt is when the front bony parts of the hips (the tops of the ilium) move forward and down, creating a more pronounced arch in the lower back.

Proximal refers to something closer to the torso of the body and distal is further away from the torso. So the distal end of the forearm is close to the wrist and the proximal end is closer to the elbow.

Anatomical Planes – or Planes of Movement

There are three main anatomical planes in the body. These are flat plates or surfaces that divide up the body. Movements can be described as taking place in one of these planes, or in parallel with them.

This vertical plane runs down through the centre of your body dividing up the left half from the right. The term sagittal comes from the Latin word sagitta meaning arrow – so it might help to think of an archer raising an arm up and back to take an arrow out of the quiver, drawing their arm back and firing the arrow forward. All these actions are in the sagittal plane. Most of the movements in Sun Salutations also take place in the sagittal plane.

This vertical plane divides the front and back portions of the body. Coronal is from the Latin corona meaning crown or garland (although, personally, I think a pair of headphones is a more helpful image). Performing a cartwheel or moving from Warrior II into Triangle pose take place on the coronal plane.

A horizontal plane like a table top which divides the upper (superior) and lower (inferior) halves of the body. Twists take place in the transverse plane.

While you might not hear these planes being referred to directly in class they can be helpful to bear in mind so that you are regularly moving in all three planes. We tend to move mostly in the sagittal plane – even the shape of our yoga mats encourage this.

The study of movement is called Kinesiology. For all these terms assume you are starting in the Standard Anatomical Position which is standing up with the arms to your side, palms facing forward thumbs out.

These are movements that take place in the sagittal plane. Generally speaking, when you bring two bones towards each other the joint is in flexion – when you move them away from each other this is extension. Hugging your knees to your chest brings the knees and hips into flexion. In a standing forward bend the knees are in extension but the hips are still in flexion.

When joints can move both forwards and backwards – like the neck, spine and shoulders – it is called flexion when the movement is forwards (anterior) and extension when the movement is backwards (posterior). So for example, your neck and spine are in flexion in Cat pose (tucking the chin to the chest and rounding the back) and extension in Cow pose. Raising your arms overhead in Tree pose brings the shoulders fully into flexion, they are in extension when you reach back to your heels in Camel pose.

You may also hear the instruction to “extend your spine” meaning lengthen – technically this is Axial Extension which is a movement to lengthen out the spine by reducing the angle of the curves.

These movements take place in the Coronal plane. Adduction is the action of bringing the arms or legs towards the centre of the body, or mid-line (Adding together). Abduction moves the limbs away from the centre. So from the Anatomical Position (see above) raising the arms to the sides would be abduction.

You’ll often hear about rotation in relation to hip opening poses. Internal (medial) rotation brings the fronts of the thighs towards the centre as in Supta Virasana and Utkatasana. External (lateral) rotation brings the fronts of the thighs away from each other as in Lotus pose or Baddha Konasana. You may find internally rotated hip openers easier than externally rotated hip openers or vice versa depending on the structure of the hip joint as we mentioned earlier. Whichever way your hips are rotating, check that the movement comes from the hips and not the knees so that you don’t twist the knee joint at all.

Learn more about anatomy in class

Jenny SavageJenny Savage is part of the EkhartYoga team behind the scenes. She first started yoga at the age of 15 and took her teacher training with Esther Ekhart in 2013. She has a background in Health Psychology, community mental health work, and health and wellbeing research.
Follow
BeginnersAnatomy
Play
Pause
Connect
Support
About
Apps